665 results for Victorinox from 9 online stores. Victorinox price in pakistan ranges from Rs. 300 to Rs. 7,799 665 results for Victorinox from 9 online stores. Victorinox price in pakistan ranges from Rs. 300 to Rs. 7,799

Victorinox has been making quality products for more than a hundred years, with the most famous being their Swiss Army Knife. A compact tool that is known the world over and has been a constant companion of most campers and outdoorsmen. The product range includes a few other items, all made with the same precision and care as their standpoint product. Victorinox products belong to a higher-end price range.

Victorinox has been around since 1884, from then to now they have made a steel reputation. The brand started by Karl Elsner who was a culter. The name 'Victorinox' is a portmanteau of 'Victoria' the name of his mother and 'acier inoxydable' which is the French term for stainless steel. For a long time, they along with Wenger provided the Swiss Army with the famed Swiss Army Knife. Based on a mutual understanding between them Wenger has advertised as the 'Genuine Swiss Army Knife' and Victorinox used the slogan, 'Original Swiss Army Knife'. In 2005, Victorinox bought Wenger and has become the sole provider of multi-purpose knives to the Swiss Army. Aside from the Swiss Army Knife, Victorinox has a line of other products as well, all related to bettering functionality.

Originally, in 1891, produced by a German company in Solingen, the first model used by the Swiss Army was named the 'Modell 1890'. Victorinox produced a knife that was not yet ordered by the Swiss Army, in competition with the German producer. In 1896, Karl Elsner improved on the knife, made a new design that had more tools and a special spring mechanism that also allowed the tools to be held in place. The new knife was sold under the name "Swiss officer's and sports knife"; it was so good it made an international reputation and helped save the company. Later in 1908 the Swiss Army split the contract between Victorinox and Wenger. The Victorinox line is made from high-quality materials, the stainless steel used is a martensitic stainless steel alloy that is designed for extra toughness and corrosion resistance. Their saws and files have a layer of hard chromium plating aside from the special 'case hardening' process, this makes them usable for metals adding much more versatility to the tool. The Swiss Army Knife today has many variations that have their own set of tool combinations. With the knife, screwdriver, scissors, can opener and a few others that are common among all the models. Apart from these regulars, the tools may include a saw, a wire scraper, pliers, a USB, a marlinspike, a reamer, tweezers and a host of other possibilities. The Swiss Army Knife is a top-quality product that has been maintaining for decades, a literal life-saving tool in certain situations.

Over the years Victorinox has also developed other products, some they produce themselves and others are made in partnership with outside brands. The other product that is similar to the Swiss Army Knife is basically another form of said knife, the SwissCard. These cards are made of a plastic body and have slots that hold various tools. The cards are slim enough to be carried in one's wallet, ready for easy access. Typically the SwissCard includes a small knife, a small file with a screwdriver point, a plastic toothpick, tweezers, a slim ballpoint pen and a straight pin. Victorinox has a range of watches that are sold under the tag 'Swiss Army', with a mix of mechanical and quartz movements. The ranges are various lines are called Maverick, FeildForce, Airboss, I.N.O.X. and Alliance. With watches for men and women, both.

Victorinox does a range of cutlery, the original product of Karl Elsner. With a side that is dedicated to professional kitchen knives that are mostly stamped but with some that are forged. The knives are more commonly steel, with one line that has ceramic blades. The sets have knives designed for specific uses such as carving, filleting, deboning, paring and cheese knives too.

The products with more limited ranges include a line of travel gear, hard cases, soft cases and bags as well. A range of fragrances sold under the 'Swiss Army' badge and a line of handheld LED flashlights. These flashlights are made from knurled aluminium and are durable devices. The one thing that is specifically built for the Swiss Army is bayonets, which are for the SIG SG 550 produced in Switzerland.

Victorinox is known for producing extremely high-quality products that are built with good design, high-end materials and visible expertise in production. The brand is also very conscious of sustainability and over the years has developed methods to make the most of all their resources, including heating their headquarters and 120 apartments nearby from the heat produced during their knife making. This is one example. There are a host of other such sustainable processes that have won them many awards over the decades. The price range varies quite a bit depending on what the product is and the specific features in the model one chooses. Overall, though, the prices are form the higher end of the price range. But generally, the product will outlive most timelines if looked after well making them absolutely worth the money. Most of the products from their brand are produced in Switzerland, where the brand is also based; in the town called Ibach in the Canton of Schwyz. 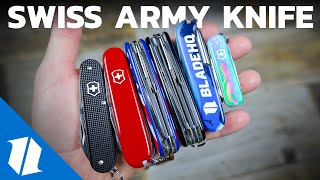 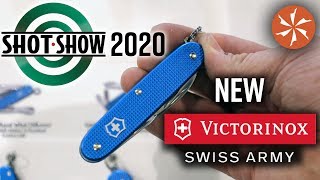 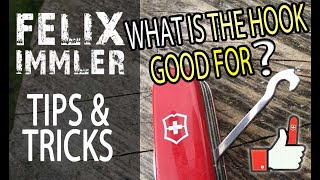 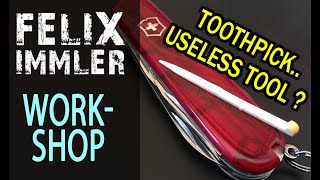 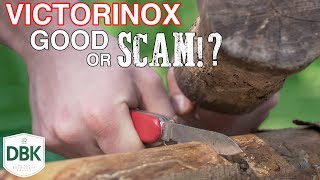 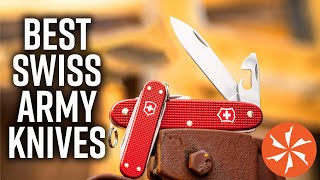 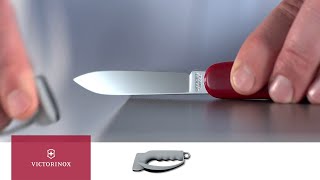 THIS IS HOW YOU SHARPEN YOUR VICTORINOX BLADE 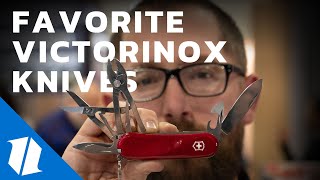 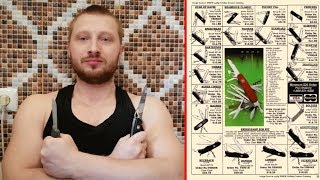 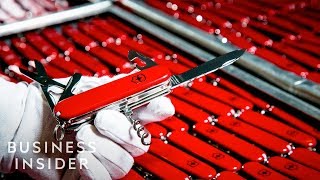 How Swiss Army Knives Are Made | The Making Of