Realme 5I Price in Pakistan Realme 5i 64GB 4GB RAM Dual SIM Green at best price in Pakistan with 1 Year Official Warranty and express shipping at your doorstep. Realme 5i 64GB 4GB RAM Dual Sim Blue at best price in Pakistan with 1 Year Official Warranty and express shipping at your doorstep. Telemart offers you the best Realme 5i (4GB,64GB) Dual Sim With Official Warranty price in Pakistan! What are you waiting for? Start carting and shopping only at Telemart.pk Realme 5i 64GB With Official Warranty

Realme 5i 64GB Price in Pakistan @ Lowest Price Guaranteed. QMart.pk Offers Cash on Delivery All Over the Pakistan....

Realme 5i Price in Pakistan

A budget-friendly smartphone from Realme. The Realme 5i is packed with all the connectivity and sensors needed. Also, a 4 camera setup on the main module to take pictures in many different modes. A well-designed phone that has ample internal specs as well. The Realme 5i is available for a mid-range price point.

Realme 5i Pros and Cons

The Realme 5i internals and OS

Released on the 7th of January 2020, the Realme 5i comes with a Qualcomm Snapdragon 665 processor powering it. This processor features 8 cores, 4 that clock in at 2.2GHz and the other 4 are clocking 1.8GHz. To handle the tasking it is loaded with 4GB of RAM. Storage space is at 64GB and can be extended via a microSD card, adding up to 256GB more. For the OS Realme has incorporated Google's Android 9, a machine learning able system that picks up on the user's patterns to speed up the phone over the initial few weeks. Running a layer of their skin called ColorOS 6.0.1. This allows for some extra personalisations that the basic Andoird 9 does not include. The Android 9 OS can be upgraded to Android 10.

Built with a 6.25 inch touchscreen, which has a resolution of 720x1600 pixels. The pixel density comes to 269ppi, with a layer of Corning's Gorilla Glass to protect it all. A useful size of screen for the camera systems to be used on. On the rear, the Realme 5i has a tetra-lens setup. The first is a 12MP primary with an aperture of f/1.8, a second 8MP with an f/2.25 aperture and a third plus fourth which are both at 2MP. This is a complex camera system that has multiple shooting modes, with a camera app that allows for versatility. On the front, there is an 8MP camera with an f/2.0 aperture for selfies.

The Realme 5i has a dual SIM setup. With other options for connectivity including WiFi, Bluetooth, micro-USB, FM Radio. 4G is active on both SIMs and it also has the USB On The Go feature that allows it to act as a host to flash drives. The sensor range on this smartphone includes all the regulars, an accelerometer, an ambient light detector, a gyroscope, a proximity sensor and a fingerprint reader. The Realme 5i also has the ability to unlock via face detection. All this is powered by a large 5000mAh battery. The battery is based on the Li-Polymer cell which is a better battery technology and can also be made into a slimmer form.

The Realme 5i was launched in Aqua Blue and Forest Green colours. It is available for a lower mid-range price. 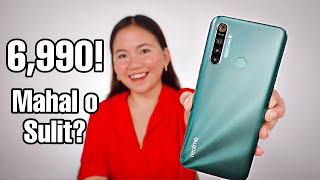 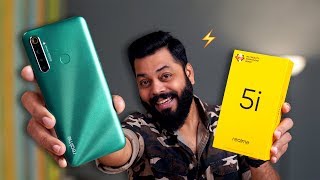 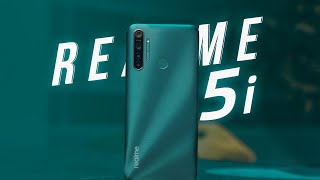 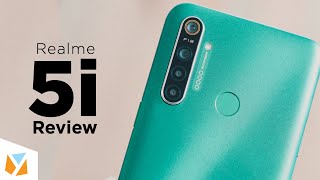 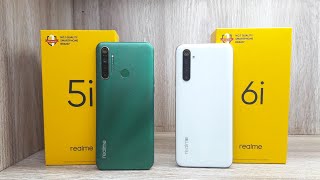 Realme 5i vs Realme 6i - Which Should You Buy ? 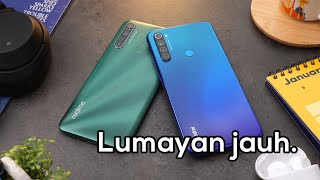 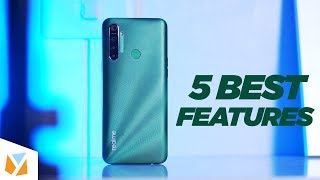 5 Best Features of the Realme 5i 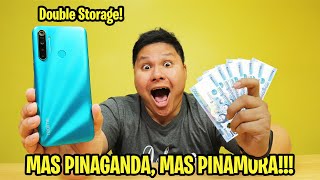 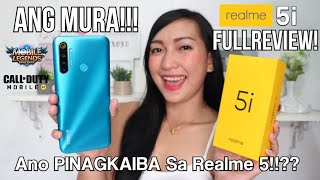 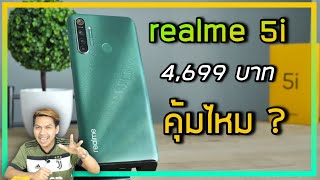 Related to Realme 5i