The Infinix S5 is a budget-friendly smartphone that has all the necessary functions. With a quad-camera system and a punch-hole for the selfie shooter, both these features are from a higher price point. It has ample internal specs, connectivity options and sensors. The Infinix S5 is designed for a younger generation and was launched in Quetzal Cyan and Violet.

Not many phones in this range have the punch-hole display, Infinix is furnishing a segment of the market that is growing the fastest; with a demand for good budget phones. For the processor, there is the entry-level MediaTek Helio P22 SoC, alongside that there is a graphics chip integration with the PowerVR GE8320. The Infinix S5 has 4GB of RAM and 64GB of built-in storage. There is the option to extend the space via a microSD card slot, this adds on another 256GB. Infinix S5 has their OS called XOS Cheetah 5.5.2 layered onto a base of Android 9 Pie. This Android version has the Machine Learning abilities which will make the phone somewhat faster after the initial weeks as it learns the user's patterns. The navigation on the XOS Cheetah is simpler in comparison to other brands that have their own User Interface skin layer such as Vivo. The OS does come with some extra apps that seem unnecessary, these can't be uninstalled either; making it inconvenient if one wants to get rid of things they don't use. XOS Cheetah does have a lot of customisation options which help the users experience. There is also a Game Mode that lets you free up RAM and captures your gameplay through a slide-out menu.

Cameras on the Infinix S5

On the rear, the Infinix S5 has a quad-lens set up with the primary at 16MP with an aperture of f/1.8 and Phase Detection Auto Focus. The second lens is a 5MP ultra-wide-angle and the third is a 2MP depth sensor that is used in the Bokeh Mode. Infinix says the fourth is a low light sensor but has not disclosed anything else about it. The front has a 32MP selfie shooter, however, the images at this size are massive so one can choose to scale the resolution to 16MP for manageable files. The camera app has toggles for Super Macro and HDR. Aside from this, there is a Night Mode, Panorama, Bokeh Mode and a built-in AI beauty filter. The cameras results are average, but it is still impressive that a smartphone at this price has a quad-lens setup. Video tops out at 1080p for both the front and back cameras, without electronic stabilisation which means the footage needs to be shot carefully. There is also an option for the Google Lens function.

With a large 6.6-inch IPS based LCD panel that has an aspect ratio of 20:9. The resolution is HD+ at 720x1600p, bringing the pixel density to 266ppi. The colours and brightness are good, but the lack of an ambient light sensor means the user has to adjust the brightness themselves when they go outdoors and that is rather dated for the current time.

The Infinix S5 has multiple avenues of connectivity, including Bluetooth 5.0, dual-band WiFi, FM Radio, GPS and USB On-The-Go. This latter feature allows the smartphone to function as a host to USB devices such as a thumb drive. This smartphone may lack an ambient light sensor but it has a compass, a proximity reader and a fingerprint reader that is mounted on the rear. The battery is a powerful 4000mAh cell based on Li-Polymer technology. These cells have a longer overall life and also can be fit into a slimmer form factor.

The Infinix S5 is available in Quetzal Cyan and Violet, colours geared for a younger generation that can also afford to buy this smartphone as it is available at a very competitive price. 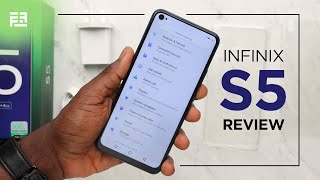 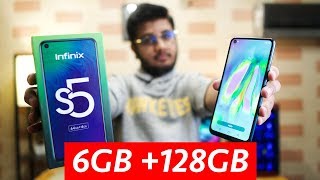 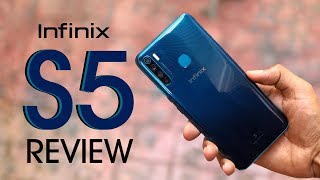 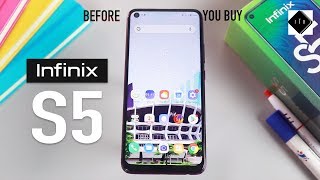 Infinix S5 Unboxing and Review! Watch this first before you buy 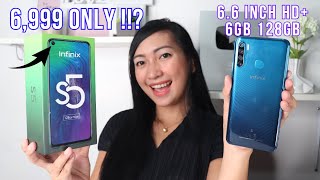 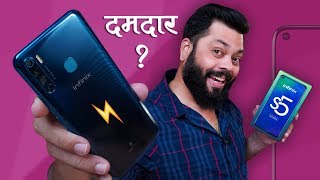 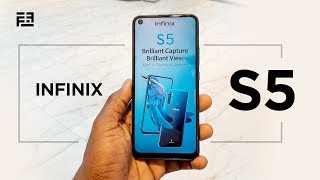 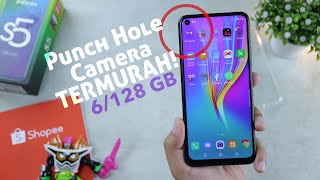 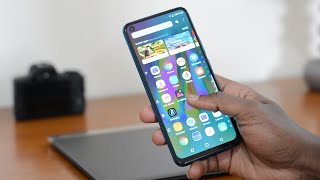 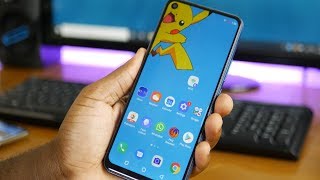