Apple Iphone 7 Plus Price in Pakistan Apple iPhone 7 Plus 32GB iPhone 7 dramatically improves the most important aspects of the iPhone experience. It introduces advanced new camera systems. The best performance and battery life ever in an iPhone. Immersive stereo spea... Apple iPhone 7 Plus (32GB,Black) - Product DescriptioniPhone 7 Plus Price & SpecsiPhone 7 dramatically improves the most important aspects of the iPhone experience. Apple Iphone 7 Plus Price in Pakistan

On the outside, the Apple iPhone 7 Plus may look like just another phone from the iPhone line-up, but with the powerful upgrades introduced in this phone, iPhone 7 Plus comes with improved cameras such as the dual-camera Plus, longer battery life and faster performance. The iPhone 7 Plus entered the market in September 2016, but to this date, it is a great buy because of its sheer value. Despite the hefty price tags, the Apple iPhone is one of the most popular smartphones amongst the Pakistani masses. The Apple iPhone 7 Plus is available at various prices sold by online as well as in-store sellers in Pakistan.

Apple Iphone 7 Plus Pros and Cons

Low resolution for a 5.5-inch display

There are subtle design changes in the 7 Plus such as the antenna bands now conveniently lay swooped around the phone's curves, making for a cleaner look instead of cutting across the back like in earlier models. The phone meets IP67 water-resistance standards and can withstand dust ingress and 30 minutes of submersion in up to a meter of water.

With a front glass body, the phone showcases a 5.5-inch IPS LCD capacitive touchscreen with a resolution of 1920x1080 and a pixel density of 401 ppi. iPhone has upgraded the display to make it 25% brighter than the previous versions, so it looks clearer and brighter outdoors, especially in broad daylight. The display also includes end-to-end colour management and cinema-standard wide colour gamut for stronger, clearer and more saturated colours. Protected by Ion-strengthened glass and oleophobic coating, the phone has a 3D Touch display and home button. Colours to choose from are Jet Black, Black, Silver, Gold, Rose Gold and Red.

Apple iPhone 7 Plus runs on iOS 10 operating system that is upgradable to iOS 12.4. The phone uses an Apple A10 Fusion (16 nm) chipset with a Quad-core 2.34 GHz (2x Hurricane + 2x Zephyr) and PowerVR Series7XT Plus (six-core graphics). It features two high-performance cores that are dedicated to system-intensive tasks and two high-efficiency cores that save battery life by operating at 1/5 the power. The 64-bit quad-core A10 Fusion chip claims double the iPhone 6's processing rate.

The phone includes a 12 MP dual camera setup on the rear and 1 front selfie camera. The rear setup includes a 28mm wide-angle camera with a wider f/1.8 aperture 6-element lens, 1/3" sensor size. PDAF and OIS. It has a second 56mm telephoto snapper with an aperture of f/2.8, 1/3.6" sensor size, autofocus and 2x optical zoom. Both rear cameras feature Portrait mode and are capable of shooting 4K videos at 30 frames per second. Both cameras use an LED flash that's 50% brighter and stronger than the previous models. The front has a 7-megapixel FaceTime HD camera with improved sensor technology and auto image stabilization that produce better selfies and clearer FaceTime calls.

The internal storage comes in 32GB, 128GB and 256GB capacity with a 3GB RAM and the phone holds a 2900 mAh battery that lasts all day. 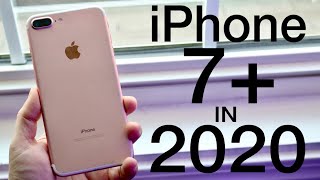 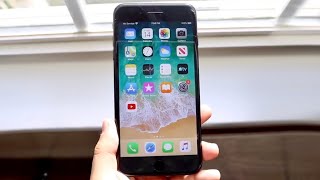 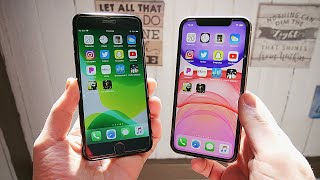 iPhone 7 Plus vs iPhone 11 Speed Test! 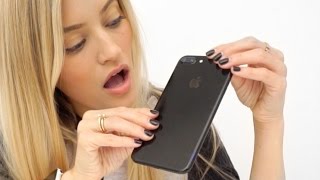 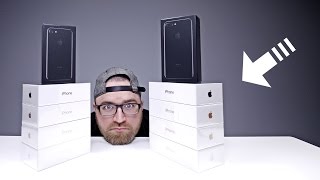 Unboxing Every iPhone 7 & iPhone 7 Plus 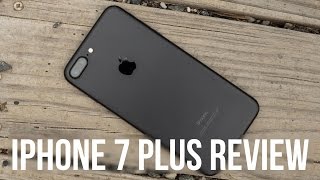 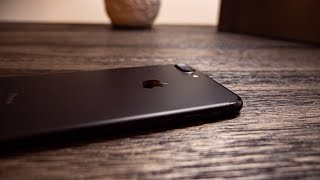 iPhone 7 Plus: Unboxing and Review! (Hands-On) 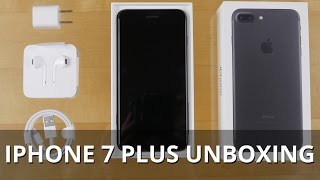 Related to Apple Iphone 7 Plus